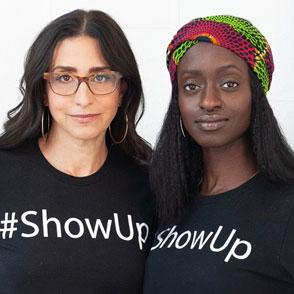 Co-Founders, From Privilege to Progress

Melissa DePino and Michelle Saahene met at Starbucks in Philadelphia on April 12, 2018. They connected after witnessing two innocent black men being arrested for not buying a coffee. Michelle was the first person to speak up, and Melissa tweeted the video, which went viral with over 13 million views. It took their cohesive effort — a black woman and a white woman standing up to racism — to set off an international story that sparked the dialogue on what racism looks like today. Together they started From Privilege to Progress, a national movement to desegregate the public conversation about race. The movement calls on all Americans to join on the path to antiracism by learning, speaking up in their everyday lives and amplifying the voices of people of color. Melissa and Michelle continue the conversation they started that day through social media campaigns and as speakers who create awareness and inspire action toward racial justice.