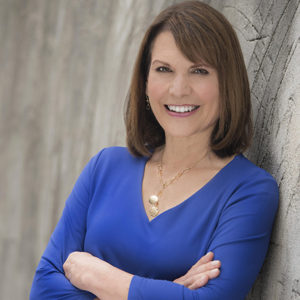 Lu Ann Cahn is the author of the inspirational memoir I Dare Me, an entertaining look back on a year that changed everything for her. The book grew out of a blog called Year of Firsts, which chronicled this veteran journalist, mother and survivor’s daily adventures as she pushed herself to try something new for every single day – an effort to get her life “unstuck,” as her daughter put it.

She went on this year long adventure while working her full-time “day job” as an 8-time Emmy award-winning journalist with NBC10 News in Philadelphia. Cahn’s journey eventually led to a major career change. In December 2014, she left her 40-year career in broadcast news to dare audiences across the country and to help launch the next generation of communicators at Temple University. Cahn is the Director of Career Services for Temple University’s Klein College of Media and Communication.

Cahn is well known in Philadelphia where she worked for WCAU-TV for 27 years. She filled many roles —breaking news reporter, anchor, and entertainment show host – but is most well known for her years as a hard-charging investigative reporter with a talent for uncovering scandals and scams. In 2005, Lu Ann won a National Emmy for her undercover investigative story “Dirty Little Secret” about an illegal bar run by elected officials in their dry town.

In 1991 Cahn made local and national news when she publicly told her story of battling breast cancer after a missed diagnosis when she was only 35. Her 1992 special report “Breast Cancer: My Personal Story” won her a national Clarion award and two Mid-Atlantic Regional Emmys.

Cahn also had surgery for ulcerative colitis and kidney cancer. She regularly speaks on behalf of Living Beyond Breast Cancer, other area cancer support groups and the Crohn’s and Colitis Foundation of America. She hopes her survivor experience inspires others.

She’s married to retired NBC10 News photographer Phil Houser and their daughter Alexa Houser is the podcast co-host of InnerBloom.